The migration of birds northward peaks in April and May, and we celebrate World Migratory Bird Day May 9 and 10. Initiated in 2006 and administered by the United Nations Environment Programme, it raises awareness about the challenges migratory birds face and the need for conservation. This year’s theme, Energy – make it bird-friendly!, urges progression toward energy production methods that help prevent or minimize bird mortality and displacement. 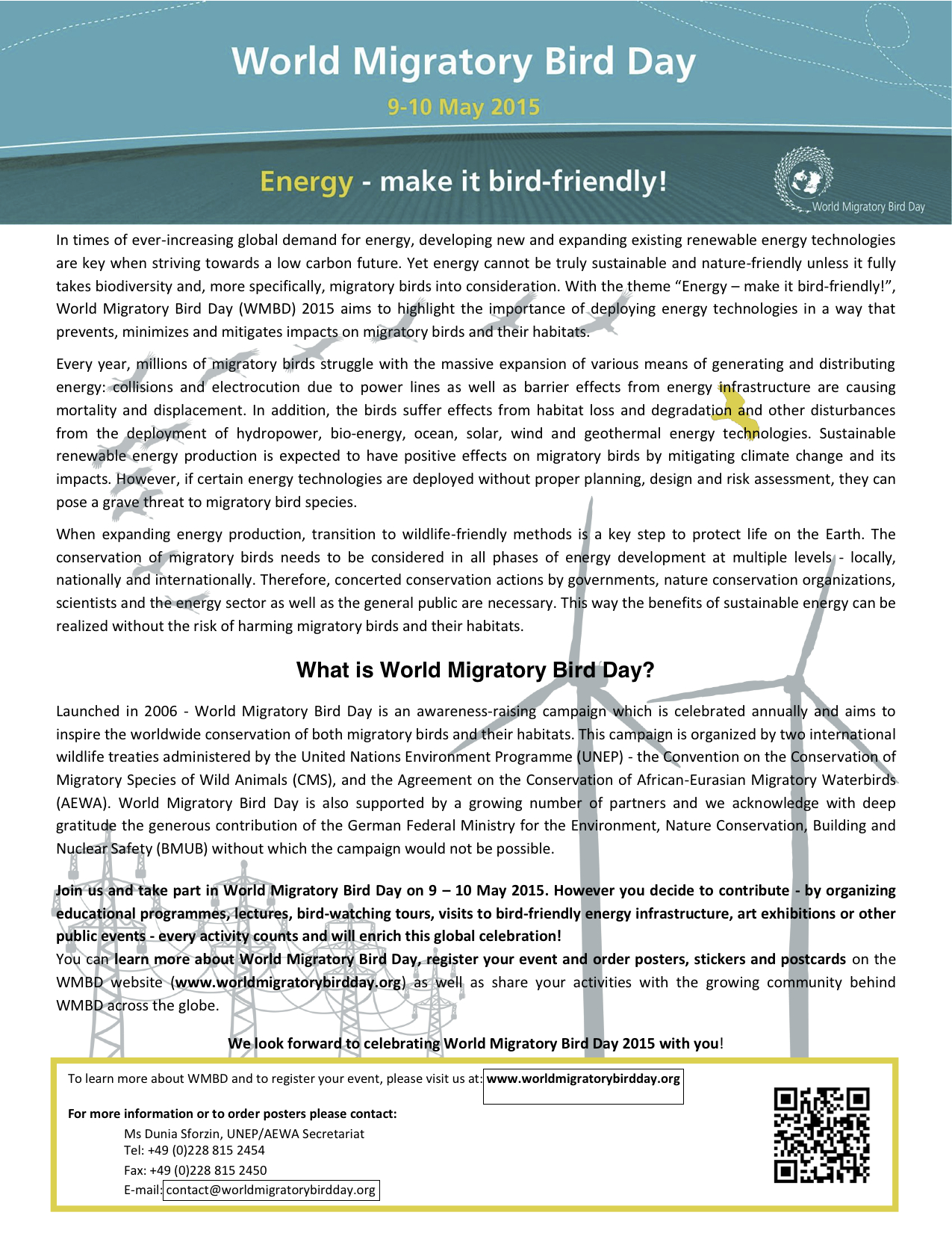 The latest study estimates that about 56 percent of building collision fatalities occur at low-rises from four- to 11-stories high. Another 44 percent of bird deaths occur when birds crash into windows of one- to three-story residences, which “equates to a median annual mortality rate of 2.1 birds per building.” (Loss et. al., 2014) High-rises account for less than 1 percent of bird deaths.

Birds collide with buildings for several reasons. They see landscape or sky reflected in window glass or through a building interior from windows directly opposite each other (a tunnel illusion). At night, lighted windows can distract and confuse migrating birds. For example, in 2013 Lights Out DC reported that the Thurgood Marshall Federal Judiciary Building (see photo right) held the inauspicious top ranking for bird strikes among the Washington, D.C. locations surveyed. Its five-story glass atrium beckoned birds either with reflections of sky or the lure of tall trees located inside the lobby, which is illuminated at night. In response to this problem, atrium lights now dim during the migratory seasons, reducing avian fatalities by about two-thirds (Anne Quito, 2015). In fact, migratory species are at most risk for building collisions. A few species, including Ruby-throated Hummingbird (Archilochus colubris) and Yellow-bellied Sapsucker (Sphyrapicus varius), “exhibit disproportionately high vulnerability to collisions regardless of building type.” (Loss et. al., 2014)

For one- to three-story residential buildings, the high risk group also includes non-migratory resident species such as Downy Woodpecker (Picoides pubescens), Black-capped Chickadee (Poecile atricapillus), and Northern Cardinal (Cardinalis cardinals). These species tend “to congregate at bird feeders, a behavior that may place them at a greater risk of colliding with windows (Dunn 1993, Klem et al. 2004, Bayne et al. 2012).” (Loss et. al., 2014) Northern Cardinals also are a territorial species that breed close to buildings. Males particularly have a propensity to attack their window reflection, which they regard as an encroaching rival. An estimated 36 percent of deaths at residences occurred on properties with bird feeders.

As we learn more about the adverse impact of human activity on bird populations, we can take steps to prevent bird fatalities. So, celebrate World Migratory Bird Day by assessing your property to determine how you can make it more bird-friendly.

Bird Feeders: Place feeders at least 6 feet above the ground and close enough (about 15 feet) to shrubs and evergreens so that birds can escape predators — but not close enough for predators, such as cats, to hide and pounce. Although it may seem counter-intuitive, locate feeders closer to residences (ideally less than 3 feet), rather than farther away. If a feeder is close to a window, the bird is likely to strike the window with less force, thus increasing its chances for survival. 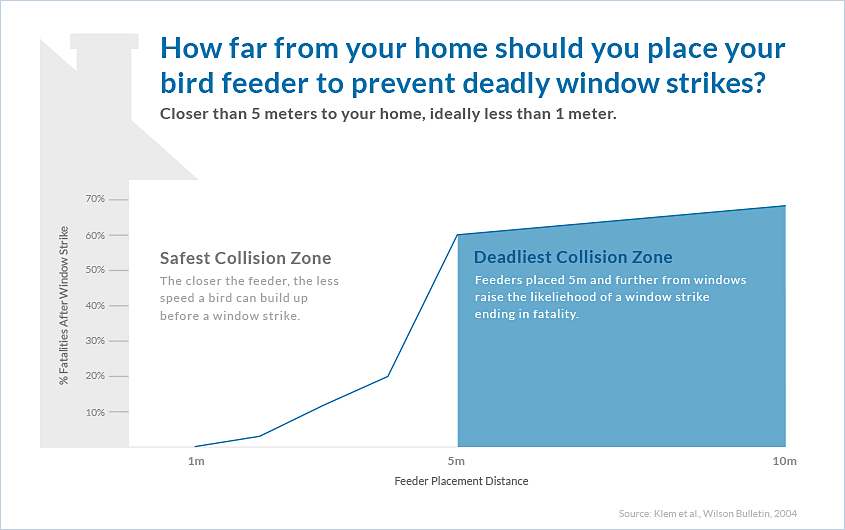 Windows: Place screen or netting outside problem windows. Affix one-way transparent film on the outside of the glass. Stick closely-spaced decals on the glass. Hang objects in front of the exterior glass. Use awnings or outside shutters. When installing new windows, consider double-hung windows with outside screens or windows with UV light-reflecting glass. For more window safety tips, refer to “Keeping Birds Safe Around Windows” at http://www.allaboutbirds.org/Page.aspx?pid=1184.